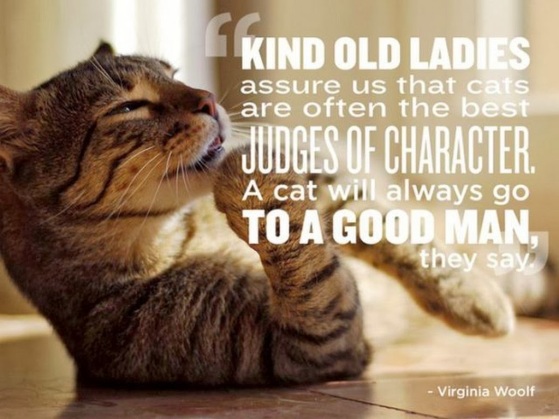 YES. This is so hard for some people to accept and I can kind off understand why. I don’t justify it, I just understand it.

I know that I tend to get on edge when people try to convince me that some animal is better than another, like why dogs are better than cats. I don’t like to be told that, especially by someone that never had a cat or a dog in his home and never experienced having any kind of pet. I like normal civilized conversations about anything animal related but I don’t like when someone intentionally comes at me with the intention of trying to lecture me why his dog wil always be better than my cat. I do get defensive at that point. And many people don’t understand that I don’t disagree with any exlusive dog lover.

Dogs are more loyal by nature and heart, they would die for their master, they’re more obedient unlike cats.
Cats ARE loyal to an extent, but a cat never needs you to survive, where as a dog, if attached, would die waiting for his master to give him food. Cats usually get attached to the home, like rats. If you have a nice comfortable home, she’ll be staying. And you can’t train a cat. If you try, it’ll be 1-0 for the cat.

Unless you have a specific breed of cat like a Savannah that is a hybrid. Now this is my dream cat to have. Savannah cats are a hybrid between a serval cat that is 100% a wild cat and a domestic cat and they think like dogs. I think they all have cheetah spots and grow to have really long legs and really big ears and they are overall big cats when they grow up. They can jump up to 5 feet. Most love water, can be trained to poop and pee in the toilet, they can be walked on a leash and they know how to swim. And of course they’re extremely loyal and beautiful.

But honestly, it’s what I love most about cats. It’s exactly because they are the way they are. If you look at it realistically, a cat is a reflection off you. Very rarely do you find an animal so close to human characteristics as a cat is. What I love and respect when it comes to a cat is that they, in most cases, demand for you to earn their respect first, and show them why should they love you. They don’t need you for food per say, they don’t need you to survive, you need to show them you are worthy of their love and attention. To many, this sounds very, selfish I’m guessing? Many don’t feel like an animal so much smaller is worth the time and effort, feeling they’re superior, but someone who thinks like that shouldn’t own a cat. They’re right, they shouldn’t even try.

Many say that once you feed a cat and give it a place to sleep, they’ll mind their own business like you don’t exist, but that person doesn’t know what he or she is talking about. Come to my house once and you’ll see just how gentle and cuddly they can be, especially on a full stomach. With the right amount of time and effort and patience, cats love you more than you know.

I got off track but like the picture says, a cat stays with a genuinely good man. If a cat hisses at you for no apparent reason, you might want to re-think you conscience.

I was in the middle of writing a completely different post, which was actually having a very sentimental vibe but now that’s shot to shit. I am having phenominal waves of every emotion right now.

I was interrupted by a Facebook page status about the progress of a little puppy’s life. At first, I didn’t know what was it about but the picture of the poor thing drew me in and appropriatelly scared me. Something horrible happened to him.

Apparently, a very nasty and vile family in the city of Kragujevac decided they’re going to, for no justifiable reason, beat up their puppy and if that wasn’t enough, pour acid all over him and leave him in their backyard struggling in pain. Why did I say for no justifiable reason, justifying this is impossible. The article was mainly describing all of the painful process he’s going through in order to make him healthy again. His skin is incredibly damaged and with each day, burns and wounds appear in more places and of course, all of this hurts him in amounts we can’t imagine. Thankfully, the wounds and pain are curable, it just takes a lot of time. They have enough money for his treatment but what they don’t have is a place for him.

I think that’s a very good sign of how his health is improving. Pretty soon, he’s going to need a loving home and a loving family that will take care of him and take him to all the treatments he will still need. I’m just spreading the word out because I knew that I have a few people/followers that live in the area that I know personally.

I just don’t understand. Tears fell down my face while reading the article and I got so angry and so pissed off. What is going through someone’s brain while committing such a crime. What the hell is with this power struggle so many apparently struggle with when it comes to animals?

Get over yourselves people. It’s an animal, not a toy. You’re not a little child that feels ownership over his favorite toy. If you didn’t know, an animal is still a living creature. It’s not a human, but that’s perfectly FINE. An animal doesn’t speak our language, it doesn’t walk on two legs (your average pet), it doesn’t eat using utensils and it doesn’t poop or pee sitting down on a toilet (unless trained). That’s it.
It breathes, it moves, it feels, it needs, it desires, it protests, it feels proud, it makes a mess and it is WORTHY. Worthy of a person’s love and nurture. I can’t explain it any simpler words. I don’t feel like I should. Any normal, sane brain will understand and won’t need any other ”reason” why not to hurt or abuse an animal that never wishes any harm towards you. It’s so heartbreaking in the most astonishing ways. I wish I knew what was going on inside my cats mind, I wish I knew what they were thinking. I wish I knew what they had to say.

Sometimes, what really truly get’s to me is the comments. I don’t know why we all feel the obligation to scroll down the comments, because in so many cases where we know what we are expecting,it should just be ignored. Comments such as the following;


No.
The comments really sink into my brain and it’s where I get furious with our world and people and the fact I live among these creatures who call themselves respectable human beings, thinking they’re worthy of respect. Not in my eyes. Not if you do this, not if you defend this.
I don’t and will never understand it. I will never, ever justify animal abuse for who ever it may be. People lose complete respect in my eyes when and if the deliberate harm of an animal touches their hands. People who feel that the emotion of hate felt towards animals is gloat worthy need to re-think their conciousness and their life. It is not alright and it is so unfair.

I dont want anyone to get me wrong. Hurting an animal in self-defense can be justified. Many street animals do have problems and rage-control problems and they can be unpredictable, even to little children. Even rats. But I will not justify an act of abuse, when the animal is minding their own business and you deliberately pick on it and worse, I don’t want to list it. You got what you asked for, what you do is what you get.

And remember this, this is something MANY annoying parents need to realize; An animal without a problem, will NEVER touch a young child/baby. They know what is an innocent being when they see it. It may look like they want to hurt it, but if your child is smaller than the dog, everything seems scary. If an animal attacked a child that was messing with him, it means your child is very much capable of knowing that they shouldn’t mess with street animals and toy with them. It’s not always the animal’s fault just because your child is considered little. Many street animals feel threatened ahead of time because they probably already let someone your child’s age toy with them and they ended up being kicked or shoved. Your child can’t know that? Neither can he.
Every animal has it’s why. It can be very see-through if an animal has a problem or if it’s acting suspcious. You just need to care enough to observe.

I am not an animal expert, but I do like to think I can understand them. I have been bitten by cats, dogs, parrots, guinea pigs, turtles, both indors and outdoors. I would walk up randomly to a cat on the street and prematurely start petting it, and even though she doesn’t hesitate for long, her claws come out and she holds onto my skin. I understand it and I stay still and look her right in the eye as a sign I don’t want to grab her, hurt her or anything. It is genuinely not my intention. Each and every time, the cat would look back and remove her claws and stand still. I would ease into it once more and she’d let me pet her.

They are very much aware that they ARE smaller and weaker than you and therefore, have to be on double watch for their well being.

I know I am writing something so generic, something that most people hear but it’s so heart breaking. I don’t understand it and I feel like a small percentage of people adress these types of things.

As a notorious, humongous cat lover, obviously I have kept track more so than for other’s, but you just may know these. You still won’t be able to say they’re not fabulous facts! Scroll over #19 if you’re not a cat fan.

One of my favorite subjects in the entire world. Hours and hours of ”research” – late nights on various sites and wikipedia’s – on animals. All kinds of animals, all types of facts… I’m gonna write multiple posts on this. Tell me if you knew most or any of these.

I guess you stumbled upon my blog! If you are in the mood to read a bunch of life updates and sometimes controversial opinions and thoughts on various things, make even some fun surveys, scroll down and enjoy! Feel free to state your opinion. *^_^*